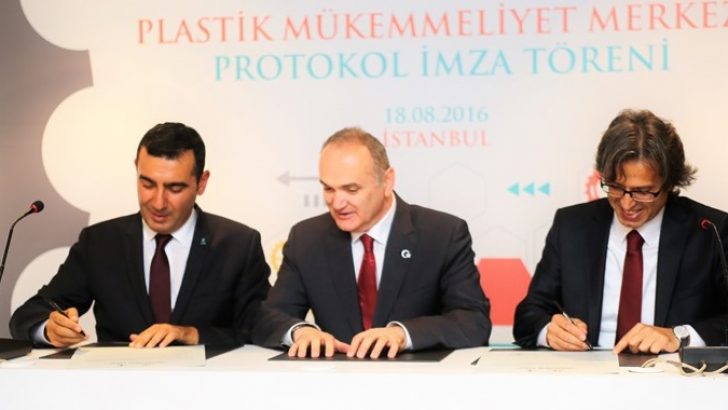 The production capacity of Turkish plastics industry reached 8.6 million tons in 2015, making Turkey the second largest producer in Europe, and sixth in the world. Amount of export in the industry reached $4.34 billion in the same period. As a country that takes firm steps forward to be a pioneer in production, however, Turkey stands below the average in terms of export of plastic products with added value in the world. While globally leading exporting countries create $5.3 per kilogram, it is $2.8 per kilogram in Turkey. Seeking solutions for this problem that is of particular concern to the Turkish plastics industry, PAGEV took action to help industry provide higher added value through state-of-the-art technology with competitive advantage. PAGEV took action to establish the first PAGEV Plastics Center of Excellence in Turkey with support of the Ministry of Science, Industry and Technology. Initial target of this center that will enable high-technology production will be increasing added value to $4 per kg and narrowing the foreign trade deficit.

The Turkish Plastics Foundation (PAGEV) speeded up its efforts to increase global competitive capacity and sustainability of Turkish plastics industry. The Foundation will establish the ‘Plastics Center of Excellence’, where technologies with higher added value will be developed to support small- and large-sized plastics producers.

The Center will be built in the Küçükçekmece PAGEV Vocational and Technical High School, and will have an indoor space of 30,000 square meters. The first stage of the project, which is a facility of 3500 square meters, is expected to be commissioned within one year. The entire project is an investment of 70 million Turkish lira and will take four years to complete. The protocol allows for the establishment of additional PAGEV Plastics Centers of Excellence elsewhere in Turkey depending on requirements, also with the support of PAGEV and the Ministry of Science, Industry and Technology.

The PAGEV Plastics Center of Excellence will help to train industrial skills and talent that will provide the foundation of national projects, providing a boost to the plastics industry in particular, and the Turkish economy in general. The PAGEV Plastics Center of Excellence will be a product of strategic partnership which will encourage scientific research with traceable objectives and a high potential for commercialization in order to accelerate the growth of the plastics industry.

The Center will serve the chemical, rubber and composite industries as well with research, certification, testing and laboratory services, and cooperate with industrial companies, universities, research institutions, professional associations and nongovernmental organizations for developing the latest technologies. The Center will also provide professional and technical training and advisory services. The machinery industry will benefit from the Center as well through quality and quantity improvements in plastic machinery, mold and equipment production. All of these will improve the competitive strength of the industry, ultimately making Turkey the global hub of plastics production

It will prevent non-standard products from entering the market…

The PAGEV Plastics Center of Excellence will act as a controlling body for export products, which will ensure that plastic products made in Turkey will enjoy better trust and reputation in global markets. Another benefit of the Center will be tests performed on imported plastics before they are admitted through customs, which will prevent non-standard products of poor quality from entering the market.

During his opening speech to the signing ceremony, “Turkey reached 8.6 million tons of production capacity in 2015, which made us sixth biggest producer in the world, and second in Europe. Amount of export hit $4.34 billion in the same period. Even if have been increasing our contribution to Turkish economy and industry with high-end production and export performance day by day, we have more in our sights. We have to boast added-value production to reach our goals. Today, unit export value per kilogram is $5.3 for top 10 exporting countries and unit import value is $2 on average, while every kilogram of production and export create an average of $3.3 added value. Plastics producers in Turkey import feedstock for $1.8 per kilogram, and exports for a unit price of $2.8. Added value per kilogram is $1. What we want to succeed is to increase this added value up to $4 per kilogram. We will achieve this goal by our PAGEV Plastics Center of Excellence with the support of Ministry of Science, Industry and Technology. This will be a Center of Excellence that serves R&D and innovation, trainings, certification, testing, laboratory and consultancy services for developing higher added value” said the Chair of PAGEV Yavuz Eroğlu.

Underscoring that PAGEV Plastics Center of Excellence will develop and support innovative projects to make Turkey the largest production base for plastics, Yavuz Eroğlu added: “PAGEV will lead the Plastics Center of Excellence to position Turkish plastics industry as a global leader. We will increase our contribution to the national economy, which is currently $13 billion, and help narrow the foreign trade deficit. By means of added-value production, we also will increase direct and indirect export throughout the industry by 43 percent on dollar basis,” ending his words.

Prof. Dr. İbrahim Kılıçaslan, the General Director of Industry of the Ministry of Science, Industry and Technology, commented on the low added-value production in Turkish plastics industry despite well-established product manufacturing. He said: “We should incorporate R&D, design and brand to our inputs for creating state-of-the-art products with high added-value. There is no R&D center in the plastics industry. With support of the Ministry of Science, Industry and Technology, PAGEV Plastics Center of Excellence will be the first step, increasing the added-value within the industry.”

The Minister of Science, Industry and Technology Faruk Özlü also made statements during the signing ceremony: “We are taking the first step to establish a Plastics Center of Excellence in Turkey. This Center of Excellence will cooperate with universities, industry and community to constitute a base for R&D, product development and design within the industry. Turkey should adopt a tech-intensive approach for increasing global competitive advantage in every single industry. We went through the most severe trauma in our history, just a month ago. Despite the July 15 coup attempt, Turkey continue to look ahead, without compromise from its targets. We are happy that this will dominates the private sector as well. Plastics producers are absorbed in the future of the industry, and focused on empowering competitive capacity. I believe we have a massive potential as a nation. I think we can grab the most out of success in this industry, where global demand increases around 4 percent every year.

Minister Faruk Özlü noted two fundamental problems in the plastics industry: “First, petrochemicals are the most used raw materials, 80-90 percent of which depend on foreign sources. Second, added value is low. We signed this memorandum of understanding to change the picture through the Center of Excellence. R&D projects that small-sized companies cannot carry out with their current level of knowledge and technology will be run in cooperation in this center. This center will make high-quality and high added-value production in plastics industry possible.”